Thank you to Article Magazine for sending this wonderful image our way! The image was taken in Tempelhof Feld in Berlin by photographer Matt Holyoak for the latest issue of Article Magazine. Pre-order your copy of Issue Six now before it hits official newsagents in November. (also if you pre-order now, you can get the collector’s edition of issue six). Remember this issue includes SIXTEEN full pages of Hugh. 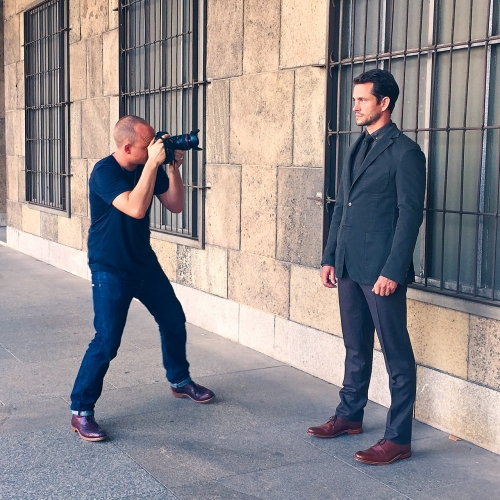 Thank you to my friend Annie over at mrcavill.com for sending this scan our way! I have added a scan from the latest issue of TV Guide Magazine to our photo archive. Thank you to my friend Mouza over at chris-pratt.org for sending this our way! I have added magazine scans from the June 12th issue of EW Magazine to our photo archive. Thank you to my friend Claudia from marymcdonnell.org for sending these our way!

Thank you to my friends Liz, Claudia and Ashley for all of these. I have updated our photo archive with the latest magazine scans that feature articles about or pertaining to Hannibal.

I have added scans from Hugh’s feature in Backstage Magazine to our photo archive.

There is a remarkable moment between Hugh Dancy, as Will Graham, and Mads Mikkelsen, as Hannibal Lecter, late in the second season of NBC’s bloody good “Hannibal.” Together in Lecter’s office, the doctor and his patient are beginning to face off as Will tells Hannibal that he’s fantasized of killing him.

“How would you do it?” Hannibal calmly asks.

“With my hands,” Will says. But first Dancy pauses for a length of time not typically seen on network television and certainly not on what is, at its core, a high-concept procedural. But those lulls amid the gore are one of the many things that set this stylish series apart from its network cousins.

“There are some really wonderful pauses between Mads and I,” says Dancy, who then adds with a laugh, “and broadly speaking, that’s because one of us is trying to remember the lines.”

Returning June 4 for its third season, “Hannibal” is loosely based on Thomas Harris’ 1981 novel “Red Dragon,” which first introduced readers to the cannibalistic Hannibal Lecter as a psychiatrist aiding the FBI and Will Graham from behind bars in the hunt for a serial killer. Dancy, the British heartthrob best known at the time of his casting for such films as “Confessions of a Shopaholic” and “Adam,” admits he hadn’t read the novel and “had no real understanding or conception of Will Graham as a character” when he signed on for the role.

As it happens, Will and Hannibal have limited interaction in the book, but series creator Bryan Fuller says he saw the potential to “unpack a rich and complicated story”—one that “went to the heart of a very strange male friendship.”

In Fuller’s version, Will has been deemed potentially mentally unstable and referred to psychiatrist Hannibal, who recognizes the darkness within Will and goes to great lengths to exploit his fragile mental balance, which includes luminous, terrifying fantasies and lost time.

But keeping track of the storyline, the plot twists, what is fantasy and what is reality, and whether Will is fascinated by or wants to brutally murder Hannibal, are constant and dizzying challenges for Dancy.

Because Will has “fantasies or reveries or nightmares or whatever form they might take,” as Dancy says, the actor notes it’s important to figure out where the emotion is coming from. “And not just so we can have a cool sequence or see me all covered in sweat. Or maybe both those things are great. But it’s more, like, Where’s this taking us and what’s the note we want to strike?”

Another element that needs continuous defining is the relationship between Will and Hannibal. “The headspace is so abstract in terms of where he is in relation to Hannibal at any given time,” Dancy points out. “Do they love each other? Do they hate each other? Are they just pretending? Does he know that I know that he knows? Is it a game? Is it another game?

“I mean, there was a point in the beginning where Mads and I were just basically making our best guesses based on what we knew about the episode that we were currently shooting and hoping that we wouldn’t get a scene that just convoluted us,” the actor adds.

Dancy explains Hannibal as “the still point to a turning world while Will is constantly shifting,” and while most actors on television grasp their characters eventually, Will remains a mystery to Dancy—something he hopes enhances his performance.

“A point about Will is that he doesn’t know who he is and Hannibal knows who he is; [Hannibal] may be a nasty guy, but he’s so happy. He’s much fun. He has no qualms. So if you kind of resolve that about Will, or if I felt resolved about it, I think it would become quickly redundant,” Dancy says.

But while he claims to thrive in the unknown, Fuller can attest that the actor knows more than he lets on.

“When we sat down with him, he was so insightful about the character right off the bat,” Fuller says. “He has such great ideas and insight that I end up rewriting the scenes to include a lot of his ideas because they’re so rooted in the world and in the complications of the character.

“An actor like Hugh, who really understands storytelling on many different levels, is just a great tool to have in a showrunner’s toolbox.”

As for Mikkelsen, who first worked with Dancy on 2004’s “King Arthur,” a scene partner like Dancy is invaluable when sussing out the layered material of “Hannibal.”

“We do call each other in the middle of the night and go over scenes that we have to shoot tomorrow and figure out how we can either improve them or understand them,” Mikkelsen says.

Back in Hannibal’s office, their prep thrown away, Will has answered Hannibal and the two of them face one another. Will admits that doing bad things to bad people feels “good” but he can’t resist adding a twist to the duo’s complicated, tangled relationship. “I don’t want to kill you anymore,” he tells Hannibal. “Now that I finally find you interesting.”

For viewers, of course, “Hannibal” has never been anything but. / Read More

I have added scans of the Hannibal ten page feature in issue 106 of SciFi Now Magazine to our photo archive. Thank you to my friend Liz from mads-mikkelsen.net for sending these our way!

I have added scans from the Hannibal article in the latest issue (April 2015) of Empire UK to our photo archive. Thank you to my friend Annie from clairedanesonline.com for sending these our way!

I have added scans from the February-March 2015 Essential Homme issue featuring Hugh on the cover as well as an entire spread and interview to our photo archive. I purchased it via iTunes, if you would like to purchase it and own your own copy or you can subscribe via their official site for a copy that is not digital or on news stands now.